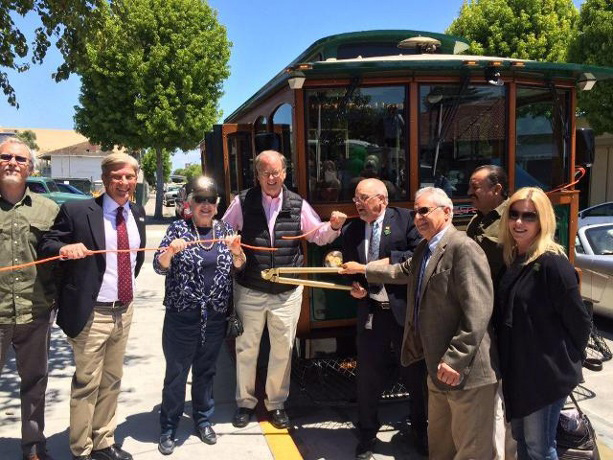 “It is the first of its kind all electric trolley that is powered through magnetic induction technology,” said Carl Sedoryk, with MST.

The trolley was once part of the all diesel fleet used by the public transportation organization, but with the help of Complete Coach Works its been retrofitted with an electric engine that charges wirelessly.

On the corner of Tyler and Pearl there is a charging plate, the trolley drives above it and syncs to charge, the technology built by WAVE, a company out of Salt Lake City, Utah.

MST is the first agency in California to use wireless power transfer technology that is installed under the roadway, transmitting electricity via magnetic waves to the vehicle.

Sedoryk said it has taken four year, a big federal grant, and a lot of hard work to bring the one of a kind trolley to the Central Coast.

The project was funded in part by a $1.67 million federal Clean Fuels grant, with an “in-kind” match from the state of California.

In attendance at the cord cutting ceremony were many of the people who helped to get the ball on the trolley rolling, including Monterey city councilor Libby Downey, and U.S. Rep. Sam Farr (D).

The event also brought in transportation employees from around the state there to see the technology in action.

“We have people from all over the state who are here who are interested in finding more environmentally sustainable ways to operate public transit in their communities,” Sedoryk said.

MST hopes to get the rest of its trolley fleet running on electricity eventually, and has already applied for another federal grant to help achieve the goal.

Any cookies that may not be particularly necessary for the website to function and is used specifically to collect user personal data via analytics, ads, other embedded contents are termed as non-necessary cookies. It is mandatory to procure user consent prior to running these cookies on your website.